PolyP is a linear chain of a few to many hundreds of phosphate (Pi) residues linked by high-energy phosphoanhydride bonds and is ubiquitous from bacteria to mammals. PolyP has several functions in bacteria: as a phosphate store; an energy source to replace ATP; in cation sequestration and storage; in cell membrane formation and function; in gene transcription control; in regulation of enzyme activities; response to stress and stationary-phase; and in the structure of channels and pumps. Since the metabolic turnover of ATP is considerably higher than that of polyP, it has been suggested that polyP is not an efficient supply of energy and that it has a regulatory role. Arthur Kornberg’s group has described the function of polyP in the physiological adjustments of bacteria to growth, development, stress, and deprivation, its role in biofilm development, quorum sensing, and virulence, as well in long-term survival and expression of virulence factors. A function of polyP in adaptation to stress has been assigned in eukaryotic cells such as yeast, fungi, and algae. PolyP is also involved in eukaryotic cell proliferation, and induction of apoptosis in plasma and myeloma cells. We have found that polyP is stored in the dense granules (acidocalcisomes) of human platelets and is released upon their activation (Ruiz et al., 2004), being a potent modulator of blood clotting and fibrinolysis (Smith et al., 2006).

In many organisms the mobilization of polyP is performed primarily by the action of enzymes that catalyze the synthesis and degradation of this polymer—namely, the polyP kinase and the endo and exopolyphosphatases, respectively. Genes encoding an exopolyphosphatase and an endopolyphosphatase in were found in Saccharomyces cerevisiae. We characterized the L. major (Rodrigues et al., 2002) and T. cruzi (Fang et al., 2007a) exopolyphosphatases that in contrast to the yeast exopolyphosphatase prefer short chain polyP as substrate. We also characterized a vacuolar soluble pyrophosphase (VSP) (Lemercier et al., 2002) that localizes to acidocalcisomes (Huang et al., 2014), is able to hydrolize PPi and polyP, and is a potential drug target (Kotsikorou et al. 2005). Both T. cruzi and T. brucei VSP cystal structures were solved (Yang et al., 2016). We also identified a polyP kinase activity in acidocalcisomes of T. cruzi (Ruiz et al., 2001) and demonstrated the role of a Vacuolar Transporter Chaperone complex (VTC complex) in the synthesis of poly P in T. brucei (Fang et al., 2007b; Lander et al., 2013) and T. cruzi (Ulrich et al., 2014). Poly P accumulates in very large amounts in acidocalcisomes (Ruiz et al., 2001). The storage of phosphate as poly P reduces the osmotic effect of large pools of this crucial nutrient element. Trypanosomatids are especially rich in short-chain poly P such as polyP3, polyP4, and polyP5. 31P NMR spectra of purified acidocalcisomes of T. cruzi, T. brucei and L. major indicated that polyPs have an average chain length of 3.11-3.39 phosphates (Moreno et al., 2000). Based on the total concentration of polyPs in different stages of T. cruzi (Ruiz et al., 2001), the relative volume of the acidocalcisomes in these cells (0.86%, 2.3%, and 0.26% of the total cell volume of epimastigotes, amastigotes and trypomastigotes, respectively, Miranda et al., 2000), and assuming that these compounds are essentially concentrated in acidocalcisomes, the calculated concentration in the organelles is in the molar range (3-8 M). This is consistent with the detection of solid-state condensed phosphates by magic-angle spinning NMR techniques, and with the very high electron density of acidocalcisomes in situ (Moreno et al. 2002).

A rapid increase (within 2-4 h) in the levels of short- and long-chain polyP was detected during T. cruzi trypomastigote to amastigote differentiation and during the lag phase of growth of epimastigotes (within 12-24 h) (Ruiz et al., 2001). Levels rapidly decreased after epimastigotes resumed growth. The changes observed in the content of polyP in T. cruzi epimastigotes while Pi is present in the growth medium at high concentrations could imply some requirement of these compounds as energy source for resuming growth, while the changes observed during differentiation would suggest an adaptation to the intracellular life of amastigotes (Ruiz et al., 2001). Short- and long-chain polyP levels also rapidly decreased upon exposure of epimastigotes to hiposmotic stress while levels increased after hiperosmotic stress (Ruiz et al., 2001). This would suggest a role for Pi in the adaptation of the parasites to environmental stress.

Recent work has shown that synthesis of acidocalcisomes polyP is linked to the inositol polyphosphate pathway (Cordeiro et al., 2017). 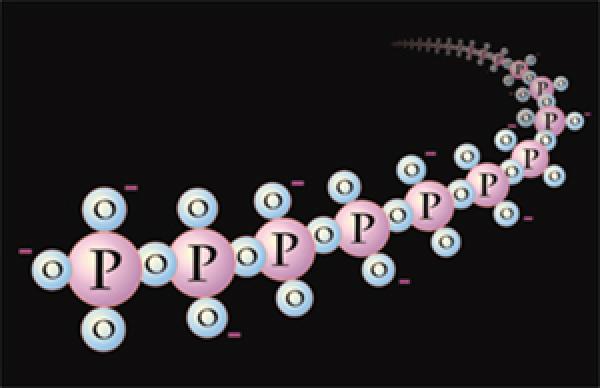